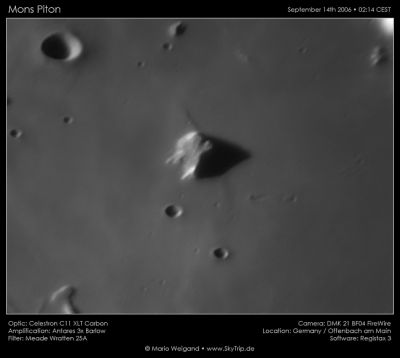 Mario Weigand Mons Piton is the shadow-casting peak at the center. Below it are 6-km Piton A and 5-km Piton B. The 13-km crater in the upper left corner is Piazzi Smyth and the bright feature in the extreme upper right corner is the Sun striking the western slopes of Promontorium Deville. This view also includes two other formerly-named peaks: Piazzi Smyth Alpha (along the upper margin, just to the left of center) and Piton Gamma (looking like the top of a dog bone in the lower left). Both these names were dropped by the IAU in 1973.