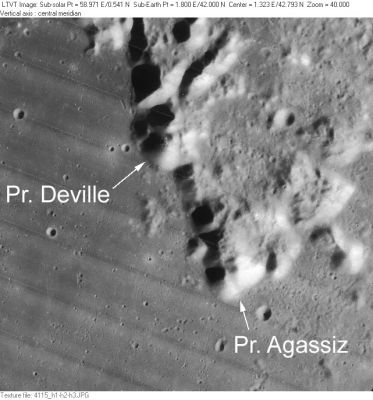 LO-IV-115H According to its IAU coordinates, Promontorium Deville is the area of peaks starting at the arrow and extending slightly to the north. However LAC 25, and the USGS Geologic Map drawn from it, identify Promontorium Deville as a group of lower hills to the north of this (only a small portion of which is visible at the top margin). That definition does not include the peaks indicated by the present arrow. Promontorium Agassiz (regarding which there is no controversy) is the lower triangular area of peaks indicated by the other arrow. - JimMosher

LPOD Photo Gallery Lunar Orbiter Images
Although there seems to be nothing in the LPI's Apollo Images Search for Promontorium Deville and adjacent peaks in the Montes Alpes, there ARE orbital Apollo photographs of those peaks! For example: Fairchild-Metric image AS15-M-1538 which shows these peaks at the centre of the curved horizon! (north of Aristillus). Research Danny Caes.