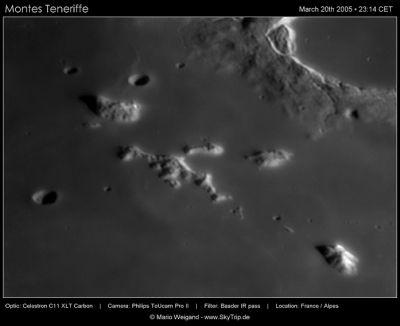 Mario Weigand Plato is in the upper right corner with brightly lit Mons Pico in the lower right. The remaining peaks are part of Montes Teneriffe. Of those visible here, the "branching chain" in the center is presumably Birt and Lee's "Alta Vista", with the "isolated rock" to its upper left designated "Chajorra" and the one to its upper right (towards Plato) "Rambleta".

(IAU Directions) THE TENERIFFE MOUNTAINS.--On the north side of the Mare Imbrium, west of Plato, there is a beautiful narrow range of bright outlying heights, which include many isolated objects of considerable altitude, one of the loftiest rising about 8,000 feet.