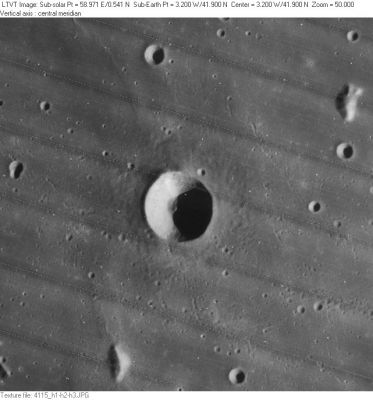 LO-IV-115H Several of the smaller craters in this view are named satellite features of Piazzi Smyth. In the original IAU nomenclature, the small hill in the upper right was known as Piazzi Smyth Alpha while the one near the bottom margin was Piazzi Smyth Beta. Both names were dropped in 1973.

LPOD Photo Gallery Lunar Orbiter Images Apollo Images
Although there seems to be nothing in the LPI's database for orbital Apollo photographs of Piazzi Smyth, this crater WAS photographed by the Fairchild mapping-metric camera of Apollo 15! One of these oblique northward looking Fairchild frames is AS15-M-1543, with Piazzi Smyth near the very centre and most upper part of the curved horizon! The mountain immediately behind Piazzi Smyth is probably the one at 48°30' North/ 3° West (of which its northern part is depicted at (and near) the lower margin of Antonin Rukl's chart 4, and its southern part at (and near) the upper margin of his chart 12).
Research: Danny Caes

(IAU Directions) PIAZZI SMYTH.--A conspicuous little ring-plain, 5 or 6 miles in diameter, depressed about 1,500 feet below the Mare Imbrium, with a border rising about 2,000 feet above it. With the curious arrangement of ridges, of which it is the apparent centre, it is a striking object under a low sun.

40 years later (drawing and photograph of the Piazzi Smyth region, by Leo Aerts).