Cassini (with the Washbowl and its Plughole) 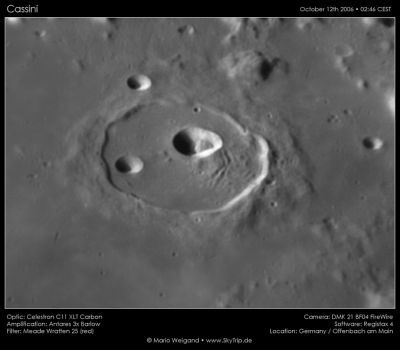 Mario Weigand Cassini is the large ring in the center. The lettered craters associated with Cassini that are visible in Mario’s view are Cassini A (the oddly shaped 15 km crater near the center of Cassini), Cassini B (to the west of Cassini A), Cassini M (outside Cassini’s ring to the north) and 7-km Cassini F (on the extreme right, in the part of Mare Imbrium once known as Palus Nebularum).

(IAU Directions) CASSINI.--This remarkable ring-plain, about 36 miles in diameter, is very similar in character to Posidonius. It has a very narrow wall, nowhere more than 4,000 feet in height, and falling on the W. to 1,500 feet. Though a prominent and beautiful object under a low sun, its attenuated border and the tone of the floor, which scarcely differs from that of the surrounding surface, render it difficult to trace under a high angle of illumination, and perhaps accounts for the fact that it escaped the notice of Hevel and Riccioli; though it is certainly strange that a formation which is thrown into such strong relief at sunrise and sunset should have been overlooked, while others hardly more prominent at these times have been drawn and described. The outline of Cassini is clearly polygonal, being made up of several rectilineal sections. The interior, nearly at the same level as the outside country, includes a large bright ring-plain, A, 9 miles in diameter and 2,600 feet in depth, which has a good-sized crater on the S. edge of a great bank which extends from the S.E. side of this ring-plain to the wall. On the W. side of the floor, close to the inner foot of the border, is a bright deep crater about two- thirds of the diameter of A, and between it and the latter Brenner has seen three small hills. The outer slope of Cassini includes much detail. On the S.E. is a row of shallow depressions just below the crest of the wall, and near the foot of the slope is a large circular shallow depression associated with a valley which runs partly round it. The shape of the glacis on the E. is especially noteworthy, the S.E. and N.E. sides meeting at a slightly acute angle at a point 10 or 12 miles E. of the summit of the ring. On the outer W. slope is a curious elongated depression, and on the N. slope two large dusky rings, well shown by Schmidt, but omitted in other maps. Most of these details are well within the scope of moderate apertures. Perhaps the most striking view of Cassini and its surroundings is obtained when the morning terminator is on the central meridian.