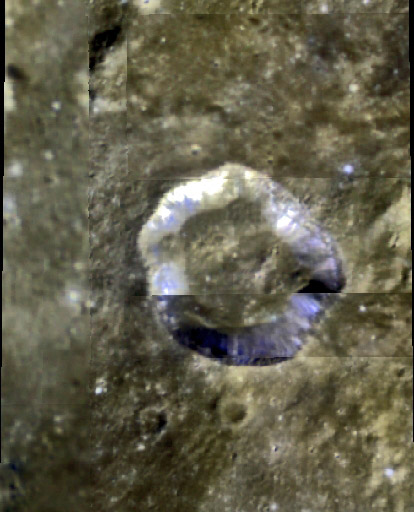 LPOD Photo Gallery Lunar Orbiter Images Apollo Images
AS15-M-1536, Hi-Res, which is one of Apollo 15's orbital Fairchild photographs, shows Montes Caucasus "below" the curved horizon's centre, and Theaetetus immediately "above" it (west of it). A bit more "right" of Theaetetus (near the curved horizon) is Cassini (of which a little bit is visible). Note also the appearance of Calippus in Montes Caucasus! - DannyCaes Dec 18, 2007

(IAU Directions) THEAETETUS.--A conspicuous ring-plain, about 16 miles in diameter, in the Palus Nebularum, N.E. of Aristillus. It is remarkable for its great depth, the floor sinking nearly 5,000 feet below the surface. Its walls, 7,000 feet high on the E., are devoid of detail. The glacis on the S.E. has a gentle slope, and extends for a great distance before it runs down to the level of the plain. Not far from the foot of the wall on the N. is a row of seven or eight bright little hills, near the western side of which originates a distinct cleft that crosses the Palus in a N.E. direction, and terminates among mountains between Cassini and Calippus. I have seen this object easily with a 4 inch achromatic.

Transient Lunar Phenomena (TLP) near or at Theaetetus