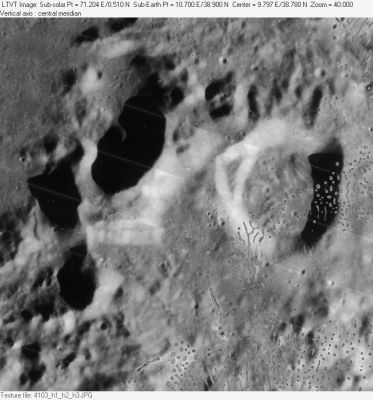 Lunar Orbiter IV-103H Calippus is the moderate sized crater on the right; the large ruined crater with the high wall casting shadows to its west is Calippus C. The lesser peaks to the south of that are unnamed.

LPOD Photo Gallery Lunar Orbiter Images
- Calippus is also noticeable on Apollo 15's Fairchild photograph AS15-M-1536. The right part of this photograph shows the curved horizon, looking North (note: on the LPI's version, North is "to the right"). The central part (the location a little "below" the central part) of the curved horizon is occupied by the Montes Caucasus. Near the horizon, at the most northern part of the Caucasus's photographed section is... Calippus. - DannyCaes Dec 18, 2007
(take a look at the HIGH-RESOLUTION version of this photograph, the Print Resolution JPG, 3 MB).
- See also the zoomify scan of AS15-M-1536 in the ASU's Apollo Image Archive, and zoom in at the Calippus region near the top of the frame!- DannyCaes Apr 16, 2011

(IAU Directions) CALIPPUS.--A bright ring-plain 17 miles in diameter, situated in the midst of the intricate Caucasus Mountain range. On the W. is a brilliant peak rising more than 13,000 feet above the Palus Nebularum, and nearer the border, on the N.W., is a second, more than 500 feet higher, with many others nearly as lofty in the vicinity. Calippus has not apparently a central peak or any other features on the floor.