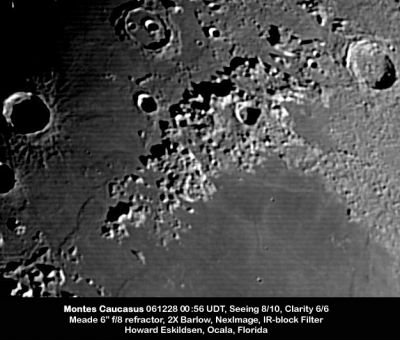 Howard Eskildsen Montes Caucasus extends diagonally across the middle of this photo. The large craters on the left are Aristillus and Autolycus. The crater in the upper right is Eudoxus. At the top is the much shallower ring of Cassini with two prominent smaller craters on its floor. The feature in the extreme lower left corner is the Promontorium Fresnel region at the northern extremity of Montes Apenninus.

(IAU Directions) THE CAUCASUS.--consist of a massive wedge-shaped mountain land, projecting southwards, and partially dividing the Mare Imbrium from the Mare Serenitatis, both of which they flank. Though without peaks so lofty as those pertaining to the Alps, there is one, immediately west of the ring-plain Calippus, which, towering to 19,000 feet, surpasses any of which the latter system can boast.

A Table of Contents
Not a Crater
Low Oblique Tour
A and A
Rotated Mountains?