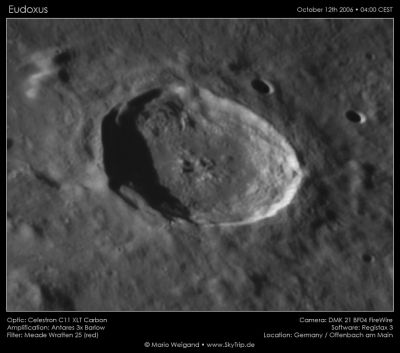 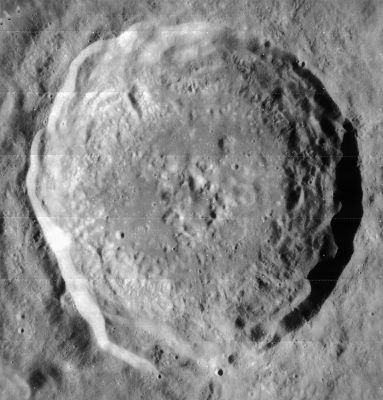 (IAU Directions) EUDOXUS.--A bright deep ring-plain, about 40 miles in diameter, in the hilly region between the Mare Serenitatis and the Mare Frigoris, with a border much broken by passes, and deviating considerably from circularity. Its massive walls, rising more than 11,000 feet above the floor on the E., and about 10,000 feet on the opposite side, are prominently terraced, and include crater-rows in the intervening valleys, while their outer slopes present a complicated system of spurs and buttresses. There is a bright crater on the N. glacis, and some distance beyond the wall on the N.E. is a small ring-plain, and on the S.W. another, with a conspicuous crater between it and the wall. Neison draws attention to an area of about 1,400 square miles on the N.W. which is covered with a great multitude of low hills. W. of Eudoxus are two short crossed clefts, and on the N. a long cleft of considerable delicacy running from N.W. to S.E. It was in connection with this formation that Trouvelot, on February 20, 1877, when the terminator passed through Aristillus and Alphonsus, saw a very narrow thread of light crossing the S. part of the interior and extending from border to border. He noted also similar appearances elsewhere, and termed them Murs enigmatiques.

Eudoxus A (Lamech's Myriame): Mapping and Naming the Moon; a history of lunar cartography and nomenclature (Ewen A. Whitaker).