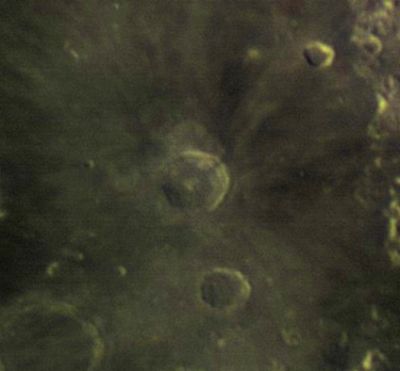 Howard Eskildsen,
Telescopic view of the Palus Nebularum and Sinus Lunicus regions (the eastern part of Mare Imbrium). Crater Autolycus is just below center of the frame, south of the much more prominent crater Aristillus. The much larger crater Archimedes is noticeable in the lower left corner of the frame. Crater Theaetetus is seen near the upper right corner. The row of mountains near the right margin of the frame are the Montes Caucasus.

(IAU Directions) AUTOLYCUS.--A ring-plain 23 miles in diameter, deviating considerably from circularity, E. of Archimedes, on the Mare Imbrium, or rather on that part of it termed the Palus Putredinis. Its floor, which contains an inconspicuous central mountain, is depressed some 4,000 feet below the surrounding country. With a power of 150 on a 4 5/8 achromatic, Dr. Sheldon of Macclesfield has seen two shallow crateriform depressions in the interior, one nearly central, and the other about midway between it and the N. wall. The wall is terraced within, and has a crater just below its crest on the E., which, when the opposite border is on the morning terminator, is seen as a distinct notch. Autolycus is the centre of a minor ray-system.

Autolycus of Pitane (ca. 360 BC—d. ca. 290 BC) was a Greek astronomer, mathematician, and geographer. Autolycus' surviving works include a book on spheres (called On the Moving Sphere) and another on the rising and setting of celestial bodies.

Three Cheers for Three As A and A