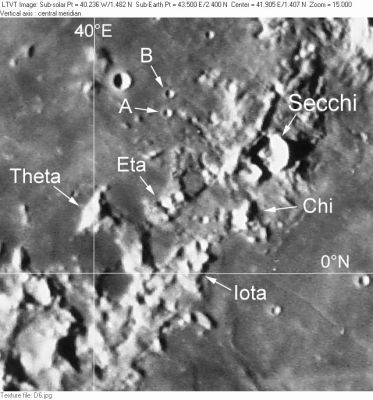 Consolidated Lunar Atlas This image has been annotated to show the classic Greek-lettered satellite features of Secchi in the original IAU system of Blagg and Müller as identified by the Army Map Service (the Greek-lettered nomenclature for lunar peaks was discontinued by the IAU in [[IAU Transactions XVB}1973]]. The unlabeled peak between Theta and Iota was possibly Lubbock Gamma (whose coordinates are given as 1 degree west of Iota; but the Army Map Service identifies that with the extension farther to the south. There is also a rille (Lubbock I) listed at the same position (41°W/0°N), but its intended identity is unclear. The System of Lunar Craters appears to have deleted all the Greek-lettered peaks except Theta, but added the 6-km lettered crater Secchi U (the bright central crater between Eta and Chi) as well as adding Secchi G, K and X (K and X straddle Rima Messier in the mare on the right; G is very hard to see, a bit above the “Secchi” label and hidden in shadow). It also named the vaguely defined 24-km diameter “craters” to the southwest and northeast of the Lubbock Gamma(??) peak as Lubbock R and Lubbock S, respectively. The prominent crater at the tip of the Secchi Iota peninsula seems to have gone unnoticed. A matching Lunar Orbiter view, showing this region with a higher Sun from the opposite side, is also available.

LPOD Photo Gallery Lunar Orbiter Images Apollo Images
- The first photograph in Apollo 8's series of the Landmark Tracking Exercise shows part of Montes Secchi near the frame's left margin. See: AS8-13-2271. South toward the top.
- Lunar Orbiter 1's Frame 1041, on which some of the Montes Secchi are visible (with the so-called Mount Marilyn in it, aka Secchi Theta).
- Orbital Hasselblad photograph AS10-35-5209 shows most of the Montes Secchi and adjacent Secchi Theta (the triangular peninsula which was called Mount Marilyn by James Lovell of Apollo 8 and Apollo 13, see Nomenclature below).
- AS10-28-4165 is one of Apollo 10's orbital B-and-W Hasselblad photographs which show both CSM Charlie Brown and Mount Marilyn in the distance.
- AS10-30-4437 is an oblique look at Mount Marilyn.
Research Lunar Orbiter and Apollo photographs: Danny Caes

(IAU Directions) MONTES SECCHI.--South of Secchi there is a lofty prominent isolated mountain.

Mount Marilyn: Navigating to the Surface