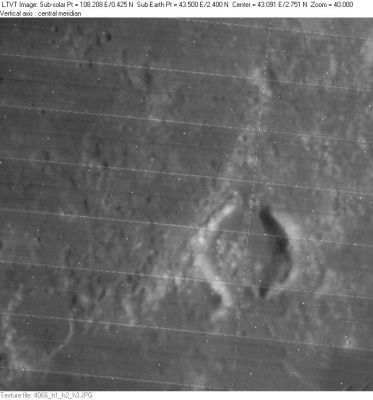 LO-IV-066H Secchi is the crater to the lower right of center. This view includes Montes Secchi which run diagonally from lower left to upper right.

(IAU Directions) SECCHI.--A partially enclosed little ring-plain S. of Taruntius, with a prominent central mountain and bright walls. There is a short cleft running in a N.W. direction from a point near the W. wall. Schmidt represents it as a row of inosculating craters.

Seeking Secchi
Little Treats (Secchi X and environs, by Lunar Orbiter 5)
US-1 and other Signposts (an extraordinary LPOD of the equatorial zone at Maskelyne-Secchi, which shows a bonanza of NASA-related nicknames!)