Hell (on the floor of Deslandres) 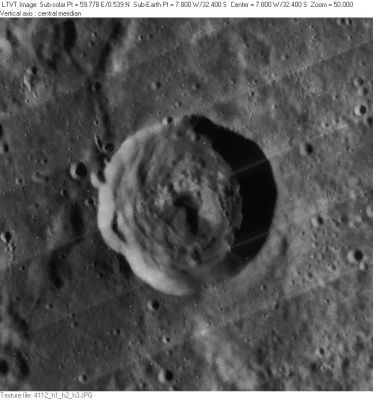 LO-IV_112_H3 As can be seen from the opposite sun angle LPOD photo, one of the small craters just outside the west rim of Hell seems to the source of a dusting of bright ejecta, not unlike the bright spot near Hell Q. This small crater is not named, but the irregular depression below it is. Its upper part (at about 9 o'clock from the center of Hell) is Hell W, and the lower part (at about 8 o'clock) is Hell V.

Hell is a transition crater, where the morphology changes with increasing impact energy (diameter) from a simple bowl, ultimately to a broad, flat-floored crater like Copernicus with central peaks and terraces. Unfortunately for Hell, its wall slumps were so extensive that the entire crater floor is filled with wall debris. - tychocrater Jun 24, 2007

(IAU Directions) HELL.--A prominent ring-plain, about 18 miles in diameter, on the W. side of the great plain. There is a central mountain and many ridges within.