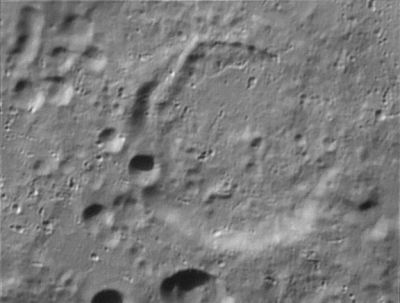 François Emond North is at about 2 o'clock in this view which includes 23-km Lexell B at the center of the lower margin. Several other lettered craters associated with Lexell, Sasserides and Orontius are also visible.

(IAU Directions) LEXELL.--On the W. of Walther extends an immense plain of irregular outline, which is at least equal to it in area. Though no large formation is found thereon; many ridges, short crater-rows, and ordinary craters figure on its rugged superficies; and on its borders stand some very noteworthy objects, among them, on the S., the walled-plain Lexell, about 32 miles in diameter, which presents many points of interest. Its irregular wall, rising, at one point on the S.E., to a height of nearly 8,000 feet, is on the N.E. almost completely wanting, only very faint indications of its site being traceable, even under a low morning sun. On the opposite side it is boldly terraced, and has a large crater on its summit. The interior, the tone of which is conspicuously darker than that of the region outside, contains a small central hill, with two craters connected with it. The low N.E. margin is traversed by a delicate valley, which, originating on the N. side of the great plain, crosses the E. quarter of Lexell and terminates apparently on the S.E. side of the floor.

Hell Plain The Case of the Missing Rim