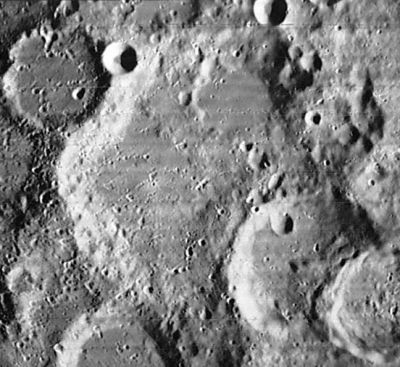 Section of Lunar Orbiter 4's frame LOIV-112-h2
The incomplete crater Orontius at centre of frame, with the crescent shaped Huggins interrupting the southeastern part of Orontius's rim. The western half of Nasireddin is seen near the frame's lower right corner. The pronounced crater near the frame's upper left corner is Sasserides A, once known as Barker by H.P.Wilkins. Rightward of the frame's lower left corner is the northern half of Saussure. - DannyCaes Apr 6, 2016

(IAU Directions) ORONTIUS.--Huggins has encroached on the E. side of this irregular ring- plain and overlaps it. It is of considerable size. The floor includes much detail and a prominent crater.

Orontius D, a bowl-shaped crater northwest of Orontius itself, shows up as a pretty looking "white ring" during Full Moon (northeast of the well-known raycrater Tycho).- DannyCaes Jun 10, 2012

A Screenful of Craters

Young Highlands Crater (a very tiny high-albedo craterlet on the floor of Orontius).