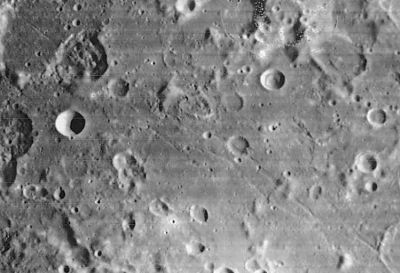 LOIV 072 H3 Portions of Rimae Gutenberg are visible extending from the top left-hand corner to the bottom right-hand corner of this image, which shows a region northwest of Gutenberg, including the small concentric(?) crater Leakey to the upper right of center. In the original IAU nomenclature, the portions shown here were primarily assigned to Capella (a designation that has since been discontinued).

LPOD Photo Gallery Lunar Orbiter Images Apollo Images
- Sunrise at the Rimae Gutenberg / Capella region, captured in a series of orbital south-looking photographs made during the mission of Apollo 8. An interesting mosaic of these photographs (AS8-13-2228 to 2237) was created by David Woods and Frank O'Brien of the Apollo 8 Flight Journal (the caption "Montes Pyrenaeus" is an error, because these mountains are out of view, to the southeast of the depicted region).
- Apollo 11's oblique east-southeast looking orbital Hasselblad photograph AS11-42-6313 shows Rimae Gutenberg, with the curious "crossing" of the rima on the floor of crater Capella M. Research: Danny Caes