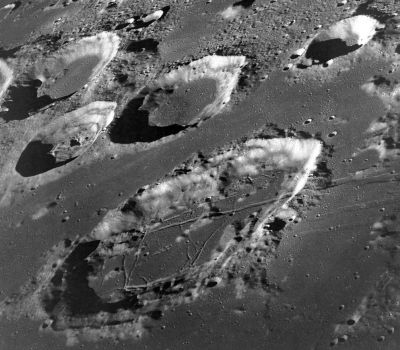 Apollo 8 AS08-13-2225
Which is one of the most well-known and most frequently reproduced orbital Apollo-Hasselblads of the moon's cratered surface. This extraordinary photograph was included on pages 620-621 of the article Apollo 8: A Most Fantastic Voyage by Lt. Gen. Sam C. Phillips (The Story of Apollo 8's Rendez-Vous with the Moon, NATIONAL GEOGRAPHIC, May 1969). Research Danny Caes.

(IAU Directions) GOCLENIUS.--A ring-plain, about 28 miles in diameter, bearing much resemblance to Plinius in form and size, and, like this formation, associated with a fine system of clefts. The lofty rampart, tolerably continuous on the E., is broken on the S.E. by a bright crater, and on the N.E. by a remarkable triangular depression. It is also traversed by a delicate valley extending from the crater on the S.E. to another on the N.E. border; and at a point a little E. of the first crater is dislocated by an intrusive mass of rock. There are several gaps on the W. and many spurs and irregularities in outline both within and without. A great portion of the N. wall is linear, and joins the W. section nearly at right angles. East of the triangular depression it appears to be partially wrecked, indications of the destruction being very evident if it be observed when the W. wall is near the morning terminator. The small bright central mountain is remarkable for its curious oblong shadow. Two clefts traverse the interior of Goclenius. (1) Originates at the S. wall, W. of the crater, and runs W. of the central mountain to the N. wall; (2) crosses the debris of the ruined N.E. border, runs parallel to the first, and extends nearly to the centre of the floor, (1) Re-appears at the foot of a mound outside the N. wall, and, after crossing the outer E. slope of the great ring-plain on the N.E. wall of Guttemberg, runs to the E. side of an oblong formation N. of it. There are two other clefts, closely parallel and E. of this, traversing the Mare, and terminating among the mountains on the N.E. These are crossed at right angles by what appears to be a "fault," running in a N.E. direction from the E. side of Guttemberg.

Land of Milk, Honey and Rilles Go See 'Em - They are Gut