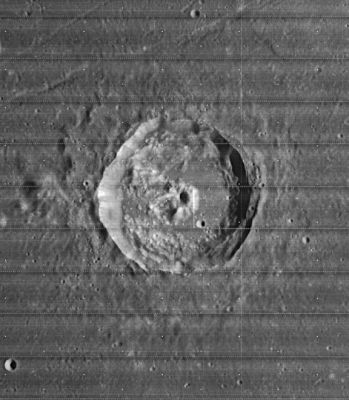 (IAU Directions) PLINIUS.--This magnificent object reminds one at sunrise of a great fortress or redoubt erected to command the passage between the Mare Tranquillitatis and the Mare Serenitatis. It is 32 miles in diameter, and is encompassed by a very massive rampart, rising at one peak on the W. to more than 6,000 feet above the interior, and displaying, especially on the S.W., and N., many spurs and buttresses. The exterior slopes at sunrise, and even when the sun is more than 10 deg. above the horizon, are seen to be traversed by wide and deep valleys. The S. glacis is especially broad, extending to a distance of 10 or 12 miles before it runs down to the level of the plain. The shape of the circumvallation, when it is fully illuminated, approximates very closely to that of an equilateral triangle with curved sides. There are two bright little craters on the outer slope, just below the summit ridge on the S.W., and another, larger, on the N. wall, in which it makes a prominent gap. The interior is considerably brighter than the surface of the surrounding Mare, and, a little S. of the centre, includes two crater-like objects with broken rims. These assume different aspects under different conditions of illumination, and it is only when the floor is lighted by a comparatively low morning sun, that their true character is apparent. On the N.E. quarter of the interior are two smaller distinct craters, and a square arrangement of ridges. On the N.W. there are some hillocks and minor elevations. The Plinius rills form an especially interesting system, and under favourable conditions may be seen in their entirety with a good 4 inch refractor, about the time when the morning terminator passes through Julius Caesar. They consist of three long fissures, originating amid the Haemus highlands, on the S. side of the Mare Serenitatis, and diverging towards the E. The most southerly commences S.S.W. of the Acherusian promontory (a great headland, 5,000 feet high, at the E. termination of the Haemus range), and, following a somewhat undulating course, runs up to the N. side of Dawes. Under a low evening sun, I have remarked many inequalities in the width of that portion of it immediately N. of Plinius, which appear to indicate that it is here made up of rows of inosculating craters. The cleft north of this originates very near it, passes a little S. of the promontory, and runs to the W. edge of the plateau surrounding Dawes. The third and most northerly cleft begins at a point immediately N. of the promontory, cuts through the S. end of the well-known Serpentine ridge on the Mare Serenitatis, and, after following a course slightly concave to the N., dies out on the N. side of the plateau. This cleft forms the line of demarcation between the dark tone of the Mare Serenitatis and the light hue of the Mare Tranquillitatis, traceable under nearly every condition of illumination, and prominent in all good photographs.