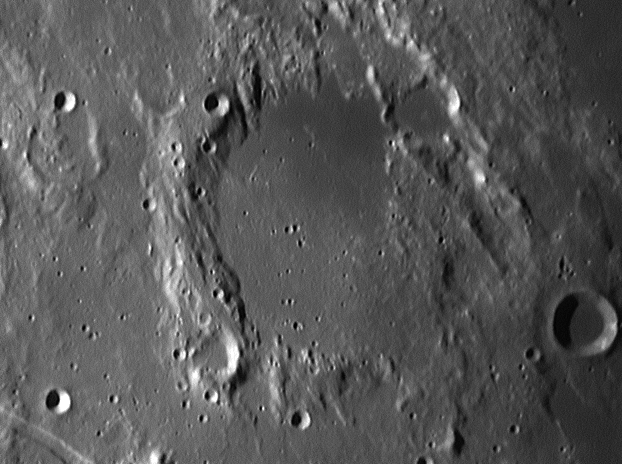 (IAU Directions) JULIUS CAESAR.--A large incomplete formation of irregular shape. The wall on the W. is much terraced, and forms a flat "S" curve. The summit ridge is especially bright, and has a conspicuous little crater upon it. On the E. is a number of narrow longitudinal valleys trending from N. to S., included by a wide valley which constitutes the boundary on this side. The border on the S. consists of a number of low rounded banks, those immediately W. of Sosigenes being traversed by several shallow valleys, which look as if they had been shaped by alluvial action. There is a brilliant little hill at the end of one of these valleys, a few miles W. of Sosigenes. The floor of Julius Caesar is uneven in tone, becoming gradually duskier from S. to N., the northern end ranking among the darkest areas on the lunar surface. There are at least three large circular swellings in the interior. A long low mound, with two or three depressions upon it, bounds the wide valley on the W. side.

Gaius Julius Caesar (July 12 or July 13, 100 BC or 102 BC – March 15, 44 BC), was a Roman military and political leader and one of the most influential men of classical antiquity. He played a critical role in the transformation of the Roman Republic into the Roman Empire.