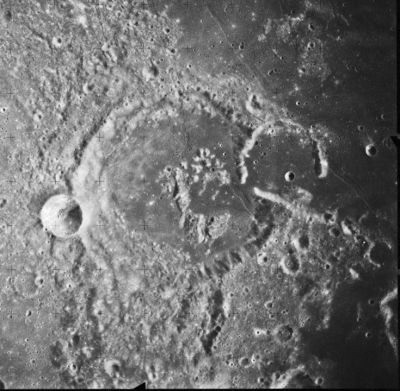 LPOD Photo Gallery images Lunar Orbiter Images Apollo Images
- A rather strange look at Gutenberg and the northwestern part of Goclenius is seen in an orbital photograph which was made during the mission of Luna 22 (looking southward, pre-sunset light).- DannyCaes Aug 8, 2010

(IAU Directions) GUTTEMBERG.--A very fine ring-plain of peculiar shape, about 45 miles in width, with a lofty wall, broken on the N.E. by another ring-plain some 14 miles in diameter, and on the S.W. by a small but distinct crater. The border presents a wide opening towards the S., which is traversed by a number of longitudinal valleys, both the W. and E. sections of the wall being prolonged in this direction. A fine crater-row runs round the outer slope of the W. wall, from the crater just mentioned to the N. side of the formation. It is best seen when the E. wall is on the evening terminator. There is also a broad valley on the S. prolongation of the E. wall. The central mountain is bright but not large. A cleft crosses the N.E. side of the floor. North of Guttemberg there is a curious oblong formation with low walls, connected with the N.W. border by a ridge, and with the N. border by a remarkable row of depressions, situated on a mound; and beyond this object on the W. are three parallel clefts running towards the N.W. On the E. will be found some of the clefts belonging to the Goclenius rill-system. In the rugged region S.W. of the formation is a peculiar low ring with a very uneven floor and a large central hill. The W. wall of Guttemberg may be regarded as forming a portion of the The Pyrenees Mountains.