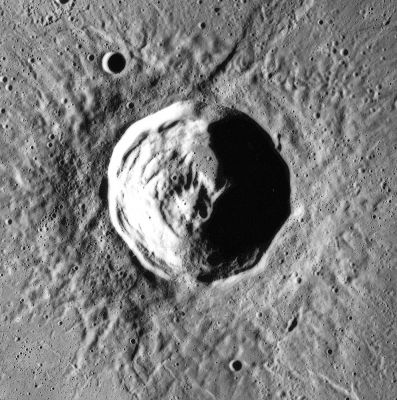 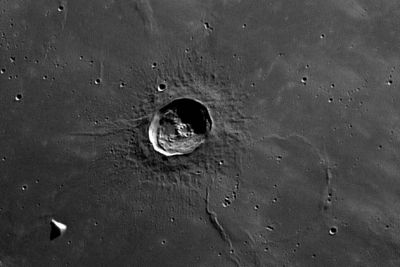 Left: Apollo 15 AS15-M-1695 The 4-km crater to the northwest of Lambert is Lambert A. Right: Wes Higgins, Lambert and the 55-km ghost crater Lambert R (note that this image is mirror-reversed with north at about a 45° angle to the upper left). Portions of Dorsum Zirkel (at top) and Dorsa Stille (at left = east) are also visible.

(IAU Directions) LAMBERT.--A ring-plain, 17 miles in diameter, presenting many noteworthy features. The crest of its border stands about 2,000 feet above the Mare Imbrium, and more than double this height above the interior. The wall is prominently terraced both within and without; the outer slope on the E. exhibiting at sunrise a nearly continuous valley running round it. When near the morning terminator, the region on the N. is seen to be traversed by some very remarkable ridges and markings; one cutting across the N. wall appears to represent a "fault." On the S. is a large polygonal enclosure formed by low ridges. On the E., towards Timocharis, is a brilliant mountain 3,000 feet high, a beautiful little object under a low sun.