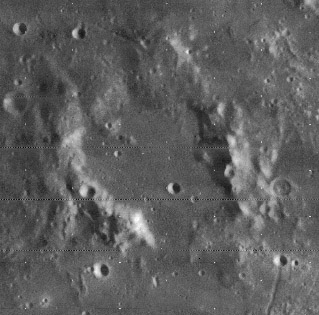 LPOD Photo Gallery Lunar Orbiter Images Apollo Images
Schroter' was also photographed during the mission of Apollo 16, and is seen on several orbital frames made by the Fairchild mapping/metric camera aboard CSM Caspers SIM-bay. Frame AS16-M-1412 shows Schroter a little bit "to the left" of the curved horizon's centre (a little bit "below" the horizon). Looking northward.
Research: Danny Caes

(IAU Directions) SCHROTER.--A somewhat larger formation (than Sommering), with a border wanting on the S. Schmidt draws a considerable crater on the S.E. side of the floor. It was in the region north of this object, which abounds in little hills and low ridges, that in the year 1822 Gruithuisen discovered a very remarkable formation consisting of a number of parallel rows of hills branching out (like the veins of a leaf from the midrib) from a central valley at an angle of 45 deg., represented by a depression between two long ridges running from north to south. The regularly arranged hollows between the hills and the longitudinal valley suggested to his fertile imagination that he had at last found a veritable city in the moon--possibly the metropolis of Kepler's Subvolvani, who were supposed to dwell on that hemisphere of our satellite which faces the earth. At any rate, he was firmly convinced that it was the work of intelligent beings, and not due to natural causes. This curious arrangement of ridges and furrows, which, according to Webb, measures about 23 miles both in length and breadth, is, owing to the shallowness of the component hills and valleys, a very difficult object to see in its entirety, as it must be viewed when close to the terminator, and even then the sun's azimuth and good definition do not always combine to afford a satisfactory glimpse of its ramifications. M. Gaudibert has given a drawing of it in the English Mechanic, vol. xviii. p. 638.

W.H.Pickering's observation of a possible gas eruption at Schroter