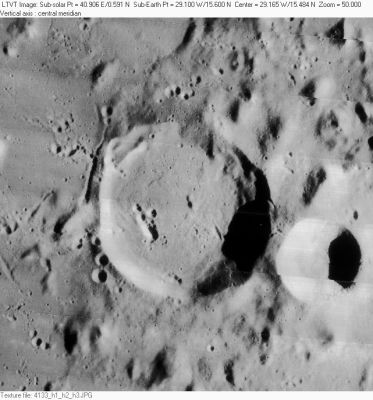 (IAU Directions) TOBIAS MAYER.--Like Gay-Lussac, a noteworthy ring-plain associated with the Carpathian Mountains. It is 22 miles in diameter, and has a wall which rises on the E. to a height of nearly 10,000 feet above the floor; on the latter there is a conspicuous central mountain, and on the W. side a crater, and some little hills. Schmidt shows a smaller crater on the E. side, which I have not seen. Adjoining the formation on the E. is a ring- plain of about one-fourth its area, which is a bright object. Tobias Mayer and the neighbouring Carpathians form an especially beautiful telescopic picture at sunrise.