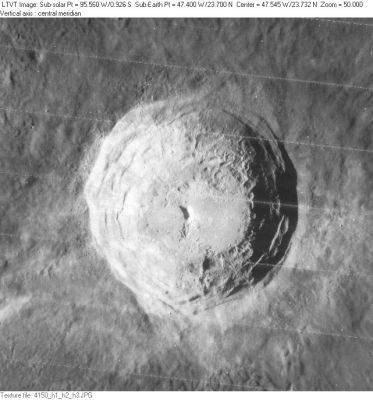 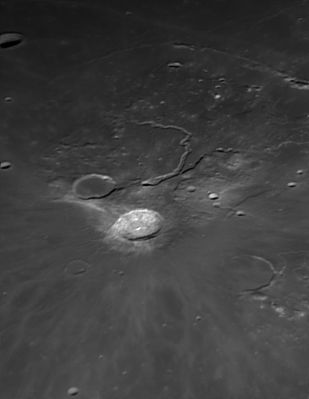 Left: LO-IV-150H Aristarchus viewed from overhead (north up). Middle: Mike Wirths Aristarchus as seen from Earth, with Herodotus and Schröter's Valley beyond, and Prinz and the Harbinger Mountains in the right foreground (north is to the upper right). 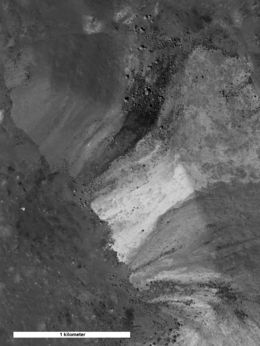 (IAU Directions) ARISTARCHUS.--The brightest object on the moon, forming with Herodotus (a companion ring-plain on the W.), and its remarkable surroundings, one of the most striking objects which the telescope has revealed on the visible surface, and one requiring much patient observation before its manifold details can be fully noted and duly appreciated. Its border rises 2,000 feet above the outer surface on the E., but towers to more than double this height above the glistening floor. No lunar object of its moderate dimensions (it is only about 29 miles in diameter) has such conspicuously terraced walls, or a greater number of spurs and buttresses; which are especially prominent on the S. A valley runs round the outer slope of the E. wall, very similar to that found in a similar position round Marius. There is also a distinct valley on the brilliant inner slope of the W. wall, below its crest. It originates at a bright little crater, and is traceable round the greater portion of the declivity. Under a moderately high sun, an oval area, nearly as large and fully as brilliant as the central mountain, is seen on this inner slope. It is bordered on either side by bands of a duskier hue, which probably represent shallow transverse valleys. From its dazzling brilliancy it is very difficult to observe the interior satisfactorily. In addition, however, to the central mountain, there is a crater on the N.E. side of the floor. On the S. side of Aristarchus is a large dusky ring some 10 miles in diameter, connected by ridges with the spurs from the wall, and on the S.W., close to the foot of the slope, is another smaller ring of a like kind.

L11: Very bright crater with dark bands on its walls.