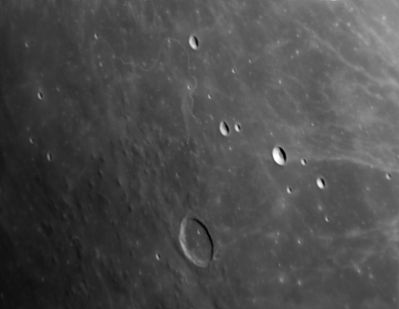 (IAU Directions) MARIUS.--A very noteworthy ring-plain, 27 miles in diameter, in the Oceanus Procellarum, W.N.W. of Kepler, with a bright border rising about 4,000 feet above the interior, which is of an uneven tone. The rampart exhibits some breaks, especially on the S. The outer slope on the E. is traversed by a fine deep valley, distinctly marked when the opposite side is on the morning terminator. It originates on the S.E. at a prominent crater situated a little below the crest of the wall, and, following its curvature, runs out on to the plain near a large mountain just beyond the foot of the N. border. In addition to the crater just mentioned, there are two smaller ones below the summit of the S. wall, and a small circular depression on the S.W. wall. Mr. W.H. Maw, F.R.A.S., has seen, with a 6 inch Cooke refractor, a bright marking at the N. extremity of the ring, which, when examined with a Dawes' eyepiece, resembled an imperfect crater. The floor includes at least four objects--(1) A crater on the N.E., standing on a circular light area; (2) a white spot a little S. of the centre; (3) a smaller white spot S.W. of this; (4) another, near the inner foot of the S.E. wall. Marius is an imposing object under oblique illumination, mainly because of the number of ridges by which it is surrounded. I have frequently remarked at sunrise that the surface on the E., and especially the outer slope of the rampart, is of a decided brown or sepia tint, similar to that which has already been noticed with respect to Geminus and its vicinity, viewed under like conditions. Schmidt in 1862 discovered a long serpentine cleft some distance N. of Marius, which has not been seen since.