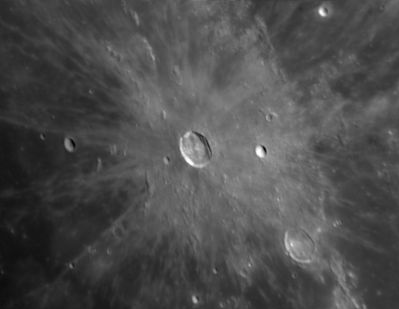 Mike Wirths
Kepler at center of image, Kepler A to the east-southeast of it, Kepler C west-northwest of it, Encke south-southeast of it. Kepler F immediately west of Kepler.
Several hills and hillocks north of Kepler once received Greek letter designations. Of them, Kepler Omega is the nearest one.

(IAU Directions) KEPLER.--One of the most brilliant objects in the second quadrant,--a ring-plain about 22 miles in diameter, with a lofty border; a peak on the W. attaining an altitude of 10,000 feet above the surface. The wall is much terraced, especially the outer slope on the E., where a narrow valley is easily traceable. Though omitted from the maps, there is a prominent circular depression on the E. border, which forms a distinct notch thereon at sunrise. On the N., the wall exhibits a conspicuous gap. There is a central hill on the floor. Immediately W. of Kepler is a bright plateau, bounded on the N. by a very straight border, with two small craters on its edge. Both these objects are incomplete on the N., as if they had been deformed by a "fault," which has apparently affected the N. end of Kepler also. Kepler is the centre of one of the most extended systems of bright streaks on the moon's visible surface.

Kepler Crater as Seen by SMART-1