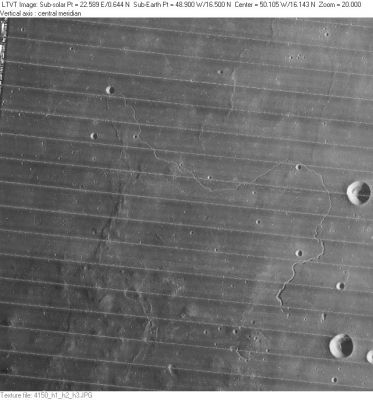 LO-IV-150H The prominent 11-12 km craters on the right are Marius B (top) and Marius C (bottom). Rima Marius winds to their west and north, reaching 4 km Marius P, where it turns a continues a bit farther to the west southwest. The IAU position and diameter quoted above is not large enough to include the part beyond Marius P.

LPOD Photo Gallery Lunar Orbiter Images Apollo Images
Rima Marius was captured on several southward looking oblique Fairchild camera frames made during the mission of Apollo 15. One of these frames is AS15-M-2610 (Hi-Res scan) in which the snaky Rima Marius is seen about halfway between Herodotus (leftward of the frame's centre) and Marius (in the distance, at the curved horizon).
Research Danny Caes

(IAU Directions) MARIUS.-- ... Schmidt in 1862 discovered a long serpentine cleft some distance N. of Marius, which has not been seen since.