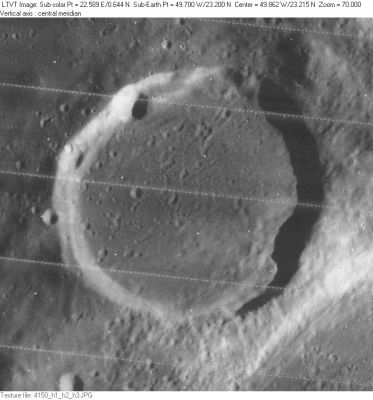 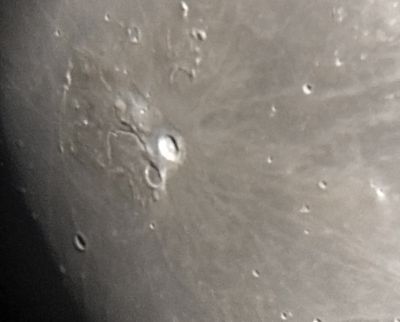 Left: LO-IV-150H Herodotus viewed from overhead. The 4-km crater on the northwest rim is Herodotus N.
Right: Menno Jansen Herodotus, with the much brighter Aristarchus to its upper right, as seen from Earth. Schröter's Valley is nicely visible.

(IAU Directions) HERODOTUS.--This far less brilliant but equally interesting object is about 23 miles in diameter, and is not so regular in shape as Aristarchus. Its E. wall rises at one point more than 4,000 feet above the very dusky floor. Except on the S.E. and N.W., the border is devoid of detail. On the S.E. three little notches may be detected on its summit, which probably represent small craters, while on the opposite side, on the inner slope, a little below the crest, is a large crater, easily seen. Both the W. and E. sections of the wall are prolonged towards the S. far beyond the limits of the formation. These rocky masses, with an intermediate wall, are very conspicuous under oblique illumination, that on the S.E. being especially brilliant. On the N. there is a gap through which the well-known serpentine cleft passes on to the floor. Between the N.E. side of Herodotus and Aristarchus is a large plateau, seen to the best advantage when the morning terminator lies a little distance W. of the former. It is traversed by a T-shaped cleft which communicates with the great serpentine cleft and extends towards the S. end of Aristarchus, till it meets a second cleft (forming the upper part of the T) running from the S.W. side of this formation along the E. side of Herodotus. The great serpentine cleft, discovered by Schroter, October 7, 1787, is in many respects the most interesting object of its class. ...(see Schröter's Valley)... The mountain plateau N. of Aristarchus deserves careful scrutiny, as it abounds in detail and includes many short clefts.