Lavoisier - and concentric crater N°48 on its floor 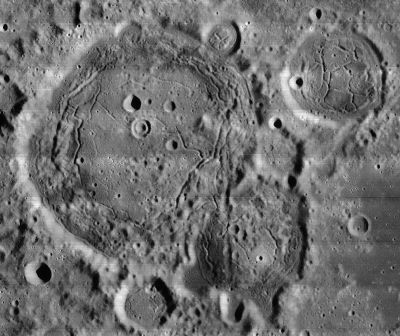 Lunar Orbiter IV image 4189 H2 Lavoisier is the large feature mostly to the left of center. The floor fractured crater in the upper right is Lavoisier H, while the irregularly shaped on with the mounded floor is Lavoisier F. The pentagonal crater tangent to the south rim of Lavoisier is Lavoisier W.

(IAU Directions) LAVOISIER.--A small bright walled-plain N. of Ulugh Beigh. It has a somewhat dark interior. East of it is Lavoisier A, a ring-plain about 14 miles in diameter. Both are too near the limb for useful observation.