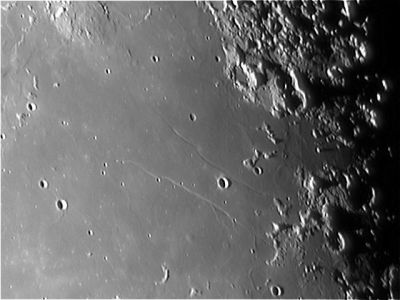 Derek Francis Cauchy is the small circular crater at about 4 o'clock from the center of this Earth-based image. The faint diagonal lines nearby are Rima Cauchy (above) and Rupes Cauchy (below).

(IAU Directions) CAUCHY.--A bright little crater, not more than 7 or 8 miles in diameter, on the E. side of the Mare Tranquillitatis, N.W. of Taruntius. It has a peak on its E. rim considerably loftier than the rest of the wall, which is visible as a brilliant spot at sunrise long before the rest of the rampart is illuminated. On the S. there are two bright longitudinal ridges ranging from N.W. to S.E. These stand in the position where Neison draws two straight clefts. The Cauchy cleft, however, lies N. of these, and terminates, as shown by Schmidt, among the mountains N.W. of Taruntius. I have seen it thus on many occasions, and it is so represented in a drawing by M.W. Stuvaert (Dessins de la Lune). There is a number of minute craters and mounds standing on the S. side of this cleft, and many others in the vicinity.

Is it love or a sinus infection?
Cauchy times two

Wöhler, C. and others (2006) A combined spectrophotometric and morphometric study of the lunar mare dome fields near Cauchy, Arago, Hortensius and Milichius. Icarus.