Kies - and Lenham (Kies A) south of it

(IAU Directions) KIES.--A somewhat similar formation, S. of Bullialdus, about 25 miles in diameter, also encircled by a border of insignificant dimensions, attaining an altitude of 2,400 feet at only one point on the S.W., while elsewhere it is scarcely higher than that of Lubiniezky. It is clearly polygonal, approximating to the hexagonal type. On the more distinct S. section a bright spur projects from it. On the N. its continuity is broken by a distinct little crater. It is traversed by a remarkable white streak, extending in a S.E. direction from Bullialdus C (where it is very wide), across the interior, to the more easterly of two craters S.E. of Mercator. Another streak branches out from it near the centre of the floor, and runs to the E. wall. The principal streak, so far as the portion within Kies is concerned, represents a cleft. On the Mare W. of Kies is a curious circular mound, and farther towards Campanus two prominent little mountains. On the N.E. is a large obscure ring and a wide shallow valley bordered by ridges. 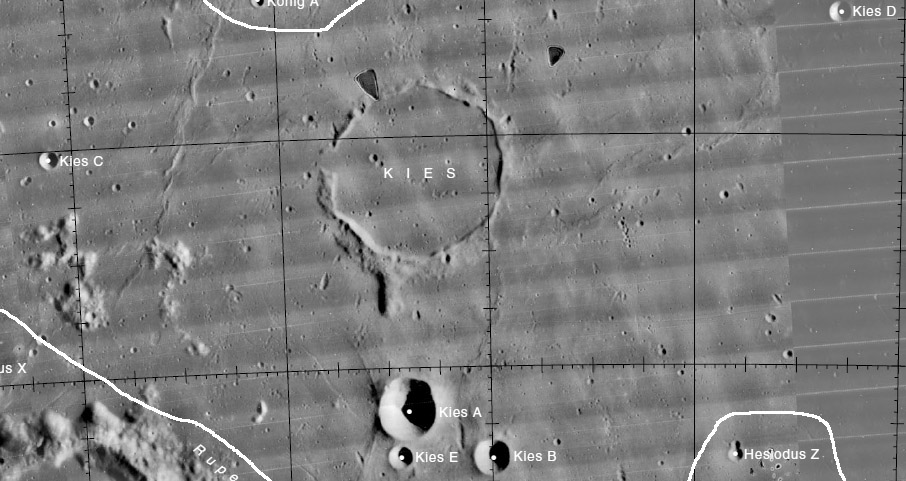 A Hole in the Wall
Horns and Wings (Lambert Spix's drawing of the sunrise shadowspires at Kies A; aka Wilkins's Lenham)