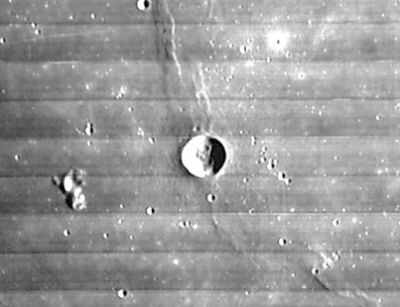 (IAU Directions) CAROLINE HERSCHEL.--A bright and very deep ring-plain about 8 miles in diameter on the Mare Imbrium, some distance W.N.W. of CARLINI. On the S.W. lies a larger crater, Delisle B, which has a small but obvious crater on its N. rim, and casts a very prominent shadow at sunrise. Caroline Herschel stands on a long curved ridge running N.W. from Lambert towards the region W. of Helicon, and, according to Schmidt, has a central peak. On the W. is a bright mountain with two peaks; some distance N. of which is a large ill-defined white spot, with another spot of a similar kind on the E. of it, nearly due N. of Caroline Herschel.