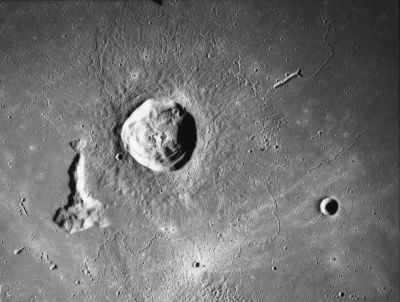 Apollo 15 AS15-M-2332 Delisle is the main crater near the center, with Mons Delisle to its lower left. Below Delisle, the tiny crater at the center of the area dusted with light colored ejecta is 2-km diameter Samir, with even tinier Louise by its side (on the east). Rima Diophantus winds across the frame from a series of small pits below Mons Delisle to the middle right margin. The shadowed 6-km circular crater below it is Diophantus B. In the upper right, a separate rille, Rima Delisle, exits an odd elongated trench.

(IAU directions) DELISLE.--A larger and more irregularly-shaped object than Diophantus, 16 miles in diameter, with loftier and more massive walls, and an extensive but ill-defined central hill. There is an evident break in the northern border. A triangular mountain on the S.W. and a winding ridge running up to the N. wall are prominent features at sunrise, as are also the brilliant summits of a group of hills some distance to the W.N.W.
...
Delisle Beta. A curious club-shaped mountain on the S.W. of Delisle, nearly 4,000 feet in height.
...
S. of Delisle there is a tolerably bright spot on the site of some hills.