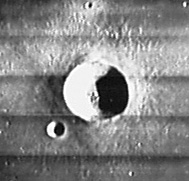 (IAU Directions) DIOPHANTUS.--Forms with Delisle, its companion on the N., a noteworthy object. It is about 13 miles in diameter, with a wall, which has a distinct break in its continuity on the N., rising about 2,500 feet above the Mare. A rill-valley runs from the W. side of the ring towards the E. face of a triangular-shaped mountain on the W. of a line joining the formation with Delisle. North are three bright little craters in a line, the middle one being much the largest. From the most westerly of these objects a light streak may be traced under a high sun, extending for many miles to another small crater on the N.E. of Diophantus, and expanding at a point due N. of the formation into a spindle-shaped marking. At sunrise, the E. portion of the streak has all the appearance of a cleft, with a branch about midway running to the S. side of Delisle. Under the same phase a broad band of shadow extends from the N.W. wall to the triangular mountain just mentioned, representing a very sudden drop in the surface--resembling on a small scale the well-known "railroad" W. of Thebit. Diophantus has no central mountain.

Diophantus of Alexandria (b. between 200 and 214, d. between 284 and 298 AD), sometimes called "the father of algebra", was a Hellenistic mathematician.