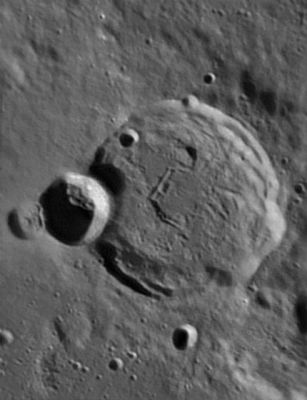 Orbital Apollo photographs of Thebit
- Apollo 12's south looking color-Hasselblad frames AS12-51-7579 and 7580 show Thebit very near the central part of the curved horizon.
- Thebit was also captured on the last 11 frames of REV 26, made by Apollo 16's south looking mapping-metric Fairchild camera. On these frames, Thebit is noticeable very near the curved horizon, close to the morning terminator.
- AS16-M-2479 of REV 48 shows Thebit near the central part of the curved horizon.
- Note that it is possible to create wonderful 3D-Stereo views of Thebit when the oblique Fairchild frames are rotated 90 degrees clockwise.
- Research Apollo photography: Danny Caes

(IAU Directions) THEBIT.--A fine ring-plain, 32 miles in diameter, on the mountainous E. margin of the Mare Nubium, N.W. of Purbach. Its irregular rampart is prominently terraced, and its continuity on the N.W. interrupted by a large deep crater (Thebit A), at least 9 miles in diameter, which has in its turn a smaller crater, of about half this size, on its margin, and a small central mountain within, which was once considered a good optical test, though it is not a difficult object in a 4 inch achromatic, if it is looked for at a favourable phase. The border of Thebit rises at one place on the N.E. to a height of nearly 10,000 feet above the interior, which includes much detail. The W. wall of Thebit A attains the same height above its floor, which is depressed more than 5,000 feet below the Mare.

Note: the smaller crater that Elger mentions on the margin of Thebit A is now known as Thebit L. Research Danny Caes.