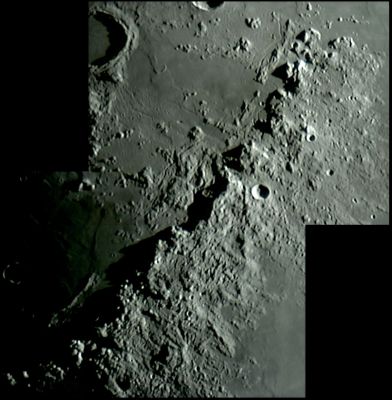 (IAU Directions)THE APENNINES.-- by far the most magnificent range on the visible surface, including as they do some 3000 peaks, and extending in an almost continuous curve of more than 400 miles in length from Mount Hadley, on the north, to the fine ring-plain Eratosthenes, which forms a fitting termination, on the south. The great headland Mount Hadley rises more than 15,000 feet, while a neighbouring promontory on the south-west of it is fully 14,000 feet, and another, close by, is still higher above the Mare. Mount Huygens, again, in N. lat. 20 deg., and the square-shaped mass Mount Wolf, near the southern end of the chain, include peaks standing 18,000 and 12,000 feet respectively above the plain, to which their flanks descend with a steep declivity. The counterscarp of the Apennines, in places 160 miles in width from west to east, runs down to the Mare Vaporum with a comparatively gentle inclination. It is everywhere traversed by winding valleys of a very intricate type, all trending towards the south-east, and includes some bright craters and mountain-rings.