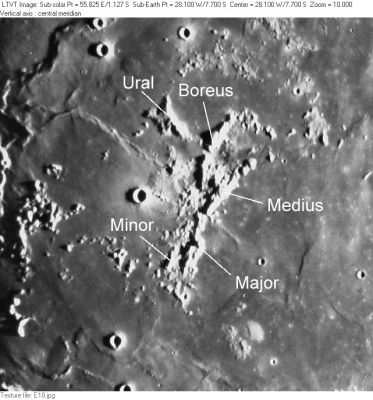 Consolidated Lunar Atlas Plate E18 In the initial IAU nomenclature of 1935, the feature now known as Montes Riphaeus was called "Riphaeus" and included the separately-named parts, Ural, Riphaeus Boreus, Riphaeus Medius, Riphaeus Major, and Riphaeus Minor, as shown. These names were dropped in the revisions of the early 1960's.
Is the east-southeastern arc-shaped section of Montes Riphaeus a very small part of a much larger circle-shaped formation? (the Cognitum-basin perhaps...).

(IAU Directions) THE RIPHAEAN MOUNTAINS.--a remarkably bright group, occupying an isolated position in the Mare Procellarum south of Landsberg, and extending for more than 100 miles in a meridional direction. They are most closely aggregated at a point nearly due east of Euclides, from which they throw off long-branching arms to the north and south, those on the north bifurcating and gradually sinking to the level of the plain. The loftiest peaks are near the extremity of this section, one of them rising to 3,000 feet. Two bright craters are associated with these mountains, one nearly central, and the other south of it.