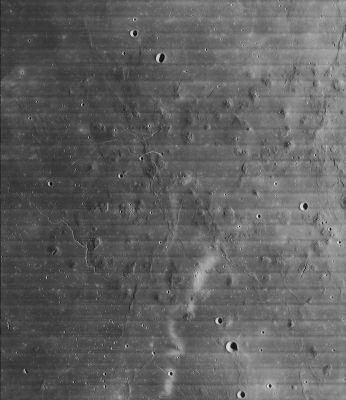 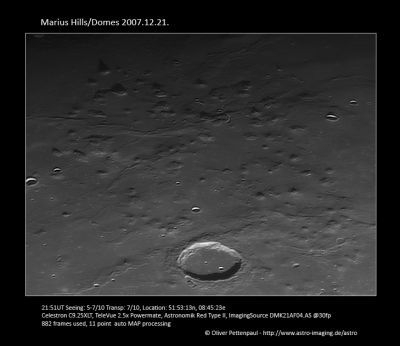 Left: LO-IV-157-H2 North is up in this overhead view in which the namesake crater Marius is out of the field to the right. The sinuous rille on the left (a little below center) is Rima Galilaei.
Right: Oliver Pettenpaul In this image, north is to the right. The namesake crater, Marius is at the bottom; and the photo extends from 8-km Reiner H and 5-km Marius X on the left to the identically sized Marius L and Q on the right (these two pairs of craters are also visible at the bottom and top of the Lunar Orbiter overhead view).

(IAU Directions) (from Neison, 1876, p. 316): Marius. ... On the west extend a very great number of these ridges together with many hills and the highest points here are Marius Epsilon which rises 1,042 feet above the plain and Iota which is perhaps 900 feet high. ... East of Marius are a considerable number of craterlets together with a number of hills only visible near the terminator though the craterlets are distinct even in Full.