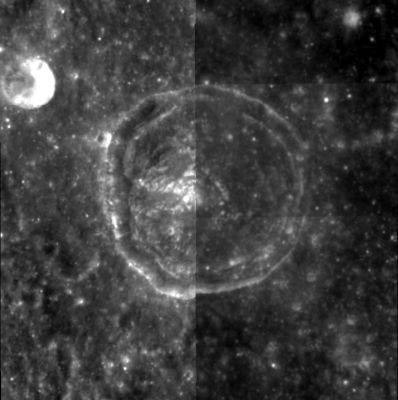 (IAU Directions) HERSCHEL.--A typical ring-plain, situated just outside the N. border of Ptolemaeus, with a lofty wall rising nearly 10,000 feet above a somewhat dusky floor, which includes a prominent central mountain. Its bright border is clearly terraced both within and without, the terraces on the inner slope of the E. wall being beautifully distinct even under a high light, and on the outer slope are some curious irregular depressions. On the S.S.W. is a large oblong deep crater, close to the rocky margin of Ptolemaeus, and a little beyond the foot of the wall on the N.E. is a smaller and more regular rimmed depression, b, standing near the W. border of the great valley, more than 80 miles long, and in places fully 10 miles wide, which runs from S.S.E. to N.N.W. on the E. side of Herschel, and bears a close resemblance to the well-known Ukert Valley. Herschel d is a large but shallow ring-plain on the W. of Herschel, with a brilliant but smaller crater on the E. of it.

North of Herschel, on a plateau concentric with its outline, stands the large polygonal ring-plain Herschel a, a formation of a very interesting character, with a low broken wall, exhibiting many gaps, and including some craters of a minute class. The largest of these stands on the S.E. wall. Mr. W.H. Maw has detected some of these objects on the N. side, both in connection with the border and beyond it.

The strange case of both Lieutenant Herschel and his brother A. S. Herschel

Note: this is something to investigate... I wonder if there might be Wikipedia biographies of these two Herschels... Were they perhaps related to William, John, and Caroline Herschel? - DannyCaes Apr 17, 2015
Indeed they were family:
Alexander Stewart Herschel or A. S. Herschel (1836-1907, British astronomer, grandson of William Herschel and son of John Herschel).
Colonel John Herschel the Younger (1837-1921, English military engineer and astronomer, grandson of William Herschel and son of John Herschel).
Note: this John Herschel the Younger could have been (or was certainly not?) the Lieutenant Herschel mentioned on pages 272 and 288 of Mysterious Universe.
Or was it perhaps Sir William James Herschel, 2nd Baronet ? (1833-1917, British officer in India who used fingerprints for identification on contracts).
Anyway, both Lieutenant Herschel and his brother A. S. Herschel are mentioned in:

I must say, it's quite interesting to explore one of the world's most famous astronomical families via Wikipedia! I wonder what kind of possible surprising facts could pop up if I explore the astronomical Struve family... Wish me good luck... - DannyCaes Apr 17, 2015