LPOD Photo Gallery Lunar Orbiter Images Apollo Images
The peculiar "amphi-theatre" shaped Harriot was captured near the lower part of the right margin of Apollo 16's Fairchild-camera frame AS16-M-3001, which was made during TEC (Trans Earth Coast).
Research: Danny Caes
It should be mentioned: investigating this (rather unknown) part of the lunar farside with help of P.Spudis's and B.Bussey's Clementine Atlas of the Moon (LAC 30, page 61) is quite an adventure! - DannyCaes Nov 5, 2012 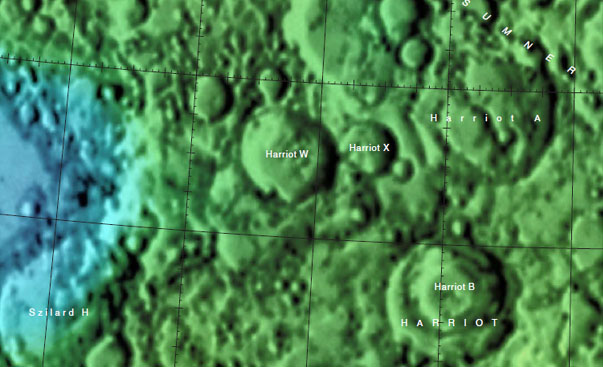 Color-coded LAC No. 30. Excerpt from the USGS Digital Atlas of the Moon.