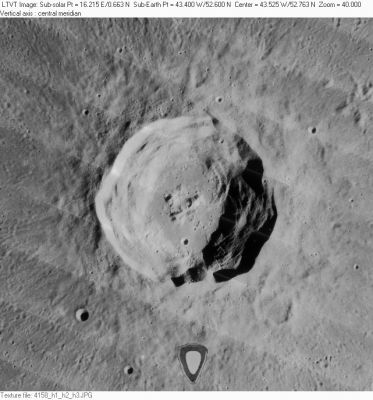 LO-IV-158H The triangular feature near the bottom margin is a defect in the Lunar Orbiter on-board development.

Trivia:
An imaginary convoy of lunar explorers, near and on the floor of Harpalus, is seen in an extraordinary painting which was made by Chesley Bonestell, for the magazine Collier's (see: the ninth painting on page Collier's 2 in Fabio Femino's Fantascienza website). - DannyCaes Jan 13, 2008

(IAU Directions) HARPALUS.--A conspicuous ring-plain, about 14 miles in diameter, on the N.W. of Foucault, with a floor sinking 13,000 feet below the surrounding surface. As the cubic contents of the border and glacis are quite inadequate to account for it, we may ask, what has become of the material which presumably once filled this vast depression? Harpalus has a bright central mountain.