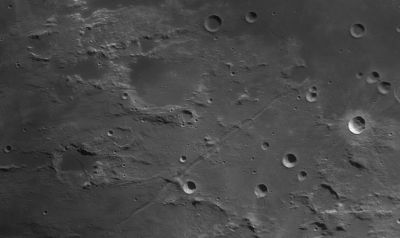 Mike Wirths, Ariadaeus Rille and Ariadaeus crater (the larger of the two touching craters at the right-hand end of the rille in this view with north to the upper left). The large ring above center is Julius Caesar and the bright one the lower right of Ariadaeus is Dionysius. Silberschlag is at the lower end of the rille (where it is crossed by the ridge). Ritter is just outside the frame to the right.

(IAU Directions) ARIADAEUS.--A bright little crater of polygonal shape, with another crater of about one-third the area adjoining it on the N.E., situated on the rocky W. margin of the Mare Tranquillitatis, N.W. of Ritter. A short cleft runs from it towards the latter, but dies out about midway. A second cleft begins near its termination, and runs up to the N.W. wall of Ritter. W. of this pair a third distinct cleft, originating at a point on the coast-line about midway between Ariadaeus and Dionysius, ends near the same place on the border. There is a fourth cleft extending from the N. side of a little bay N. of Ariadaeus across the Mare to a point N.E. of the more northerly of the three craters N. of Ritter. At a small crater on the S. flank of the mountains bordering the little bay N. of Ariadaeus originates one of the longest and most noteworthy clefts on the moon's visible surface, discovered more than a century ago by Schroter of Lilienthal. It varies considerably in breadth
and depth, but throughout its course over the plain, between Ariadaeus and Silberschlag, it can be followed without difficulty in a very small telescope. W. of the latter formation, towards Hyginus (with which rill-system it is connected), it is generally more difficult. A few miles W. of Ariadaeus it sends out a short branch, running in a S.E. direction, which can be traced as a fine white line under a moderately high sun. It is interesting to follow the course of the principal cleft across the plain, and to note its progress through the ridges and mountain groups it encounters. In the great Lick telescope it is seen to traverse some old crater-rings which have not been revealed in smaller instruments. About midway between Ariadaeus and Silberschlag it exhibits a duplication for a short distance, first detected by Webb.