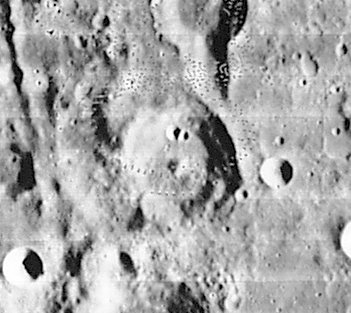 LPOD Photo Gallery Lunar Orbiter Images Apollo Images
- Argelander and Vogel (the curious system of craters immediately north of Argelander) were also captured on several frames made by Apollo 16's south-looking mapping/metric Fairchild camera, such as frame AS16-M-0707, in which the curious system of craters (called Vogel) and nearby Argelander are noticeable a little bit below and to the left of the frame's centre.
- Research: Danny Caes.

(IAU Directions) ARGELANDER.--This conspicuous ring-plain, about 20 miles in diameter, is, if we except two smaller inosculating rings on the S.E. flank of Albategnius, the most northerly of a remarkable serpentine chain of seven moderately-sized formations, extending for nearly 180 miles from the S.E. of Parrot to the N. side of Blanchinus. Its border is lofty, slightly terraced within, and includes a central peak.