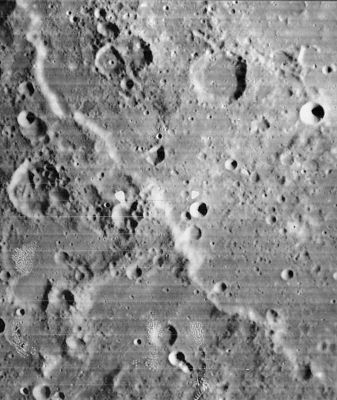 LPOD Photo Gallery Lunar Orbiter Images Apollo Images
- Rupes Altai was also captured on several frames made by the southward looking mapping/metric Fairchild camera of Apollo 16, such as frame AS16-M-0696, which shows the sunlit slopes of Rupes Altai's northern part between Catharina, Fermat, and Tacitus, this near the central part of the depicted curved horizon.
- Research: Danny Caes.

(IAU Directions) THE ALTAI MOUNTAINS.--form a magnificent chain, 275 miles in length, commencing on the outer western slope of Piccolomini, and following a tolerably direct north-west course, with a few minor bendings, to the east side of Fermat, where they turn more towards the north, ultimately terminating about midway between Tacitus and Catherina. The region situated on the south-west is a great table-land, without any prominent features, rising gently towards the mountains, which shelve steeply down to an equally barren expanse on the north-east, to which they present a lofty face, having an average altitude of about 6,000 feet. The loftiest peak, over 13,000 feet, rises east of Fermat.

154:02:57 G.E.T.: CMP Ken Mattingly (Apollo 16): "Okay. Maybe we could have drawn a terminator that was a little more over towards the area where we've shown our target, but there may be quite a drop-off in elevation here. It would only take - quite a bit, to the Sun angle wouldn't have to be an awful lot, on a geologic scale I guess. But the actual terminator was running down just to the west of Le Alda [or Mädler?] so I ran a strip down that".
- Apollo 16 Flight Journal, David Woods and Tim Brandt. Day 7: Lunar Orbital Observations, Revs 35 to 45
Additional research: Danny Caes (the "Le Alda" mystery).