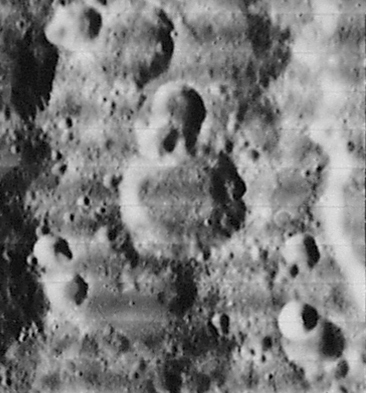 LPOD Photo Gallery Lunar Orbiter Images Apollo Images
- Although there's nothing in the LPI's search list for orbital Apollo photographs of Fermat, this crater WAS captured on several frames of Apollo 16's southward looking mapping/metric Fairchild camera, such as frame AS16-M-0697, which shows Fermat very near the central part of the depicted curved horizon, with the sunlit slopes of Rupes Altai "below Fermat" (to the east of Fermat).
- Research: Danny Caes.

(IAU Directions) FERMAT.--An irregular ring-plain 25 miles in diameter on the E. of Sacrobosco. Its partially terraced wall is broken on the N. by a gap which communicates with the interior of a smaller formation. There are some low hills on the floor, which is depressed 6,000 feet below the crest of the border.

Pierre de Fermat (August 17, 1601 – January 12, 1665) was a mathematician who is given credit for early developments that led to modern calculus. In particular, he is recognised for his discovery of an original method of finding the greatest and the smallest ordinates of curved lines, which is analogous to that of the then unknown differential calculus, as well as his research into the theory of numbers. He also made notable contributions to analytic geometry and probability. Together with René Descartes, Fermat was one of the two leading mathematicians of the first half of the 17th century.