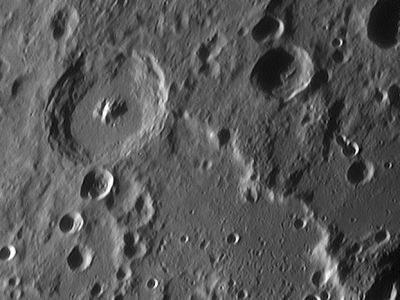 (IAU Directions) PICCOLOMINI.--A ring-plain of a very massive type, about 57 miles in diameter, S. of Fracastorius, with complex and prominently terraced walls, surmounted by very many peaks; one of which on the W. attains a height of 14,000 feet, and another, N. of it, on the same side, an altitude of 15,000 feet above the interior. The crest of this grand rampart is tolerably continuous, except on the S.E., where, for a distance of twenty miles or more, its character as regards form and brightness is entirely changed. Under a low sun, instead of a continuous bright border, we note a wide gap occupied by a dusky rugged plateau, which falls with a gentle gradient to the floor, and is traversed by three or four parallel shallow valleys running towards the S. I can recall no lunar formation which presents an appearance at all like this: one is impressed with the idea that it has resulted from the collapse of the upper portion of the wall, and the flow of some viscous material over the wreck and down the inner slope. The difference between the reflective power of this matter, whatever may be its nature, and the broad bright declivities of the inner slopes, are beautifully displayed at sunset. The cross-valleys are more easily traced under low morning illumination; but to appreciate the actual structure of the wall, it should be observed under both phases. The N.E. section of the border includes many "pockets," or long elliptical depressions, which at an early stage of sunrise give a scalloped appearance to the crest. Except the great bright central mountain with its numerous peaks, there does not appear to be any prominent detail on the floor. There is a large ring-plain beyond the foot of the glacis on the E. with two craters on the W. side of it, another on the S., and a fine rill-valley running up to its N. side from near the crest of the E. wall. On the N. side of Piccolomini is a remarkable group of deformed and overlapping enclosures, mingled with numberless craters and little depressions. The plain on the N.W. is crossed by a fine cleft.

Ring Around a Basin. A Southeast Backwater. A Generic Piece of Real Estate