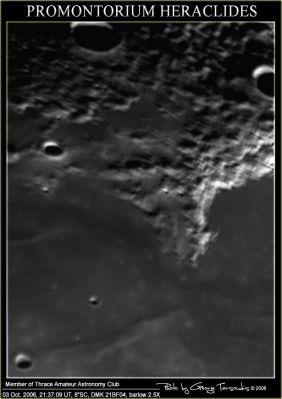 George Tarsoudis
Promontorium Heraclides during local morning light. Ancient lunar observers such as Cassini thought they saw the head of a woman in this promontory, hence the name Cassini's Moon Maiden.

(IAU Directions) THE HERACLIDES PROMONTORY.--The less lofty but still very imposing headland at the W. end of the Sinus Iridum, rising more than 4,000 feet above it. It consists of a number of distinct mountains, forming a triangular-shaped group running out to a point at the S.E. extremity of the bay, and projecting considerably beyond the shore-line. There is a considerable crater on the W. side of the headland, not visible till a late stage of sunrise. It is among the mountains composing this promontory that some ingenuity and imagination have been expended in endeavouring to trace the lineaments of a female face, termed the "Moon-maiden."