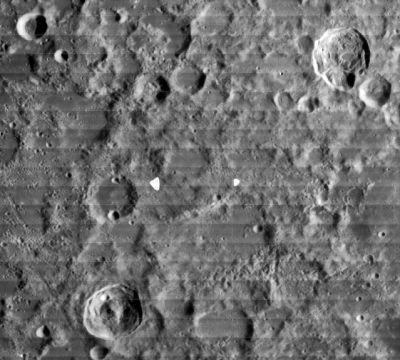 LOIV-074-H1 This view extends from 39-km diameter Römer (in the lower right) to 41-km Newcomb in the upper right. Montes Taurus refers to most of the hilly region between these two craters. The 20-km crater in the upper left is G. Bond. It lies outside the Montes Taurus area, whose boundary (according to the IAU position and diameter) is apparently closer to Kirchhoff, the more deeply shadowed of the 24-km craters at about 4 o'clock from G. Bond.

(IAU Directions) THE TAURUS MOUNTAINS.--extend from the east side of the Mare Serenitatis, near Le Monnier and Littrow, in a north-easterly direction towards Geminus and Berselius, bordering the east side of the Lacus Somniorum. They are a far less remarkable system than any of the preceding, and consist rather of a wild irregular mountain region than a range. In the neighbourhood of Berselius are some peaks which, according to Neison, cannot be less than 10,000 feet in height.