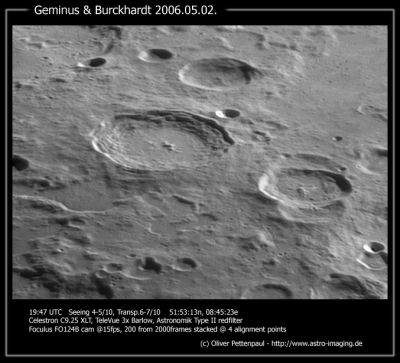 Oliver Pettenpaul Geminus is the crater just to the left of center in this view with north to the left. Behind it, to its upper right (east) is the 47 km Bernoulli, and to Geminus' lower right (south) is 56 km Burckhardt. A small piece of the large crater Cleomedes is just visible in the extreme lower right (with Debes and Tralles on the lower right margin), and of Messala in the upper left. The IAU's Geminus A is the undistinguished little 15 km crater at bottom, on the centerline; with the slightly larger and more irregular Geminus F to its left.

(IAU Directions) GEMINUS.--A fine regular ring-plain, 54 miles in diameter, nearly circular, with bright walls, rising on the W. to a height of more than 12,000 feet, and on the opposite side to nearly 16,000 feet above the floor. Their crest is everywhere very steep, and the inner slope is much terraced. There is a small but conspicuous mountain in the interior; N. of which I have seen a long ridge, where Schmidt shows some hillocks. Two fine clefts are easily visible within the ring, one running for some distance on the S.W. side of the floor, mounting the inner slope of the S.E. border to the summit ridge (where it is apparently interrupted), and then striking across the plain in a S.E. direction. Here it is accompanied for a short distance by a somewhat coarser companion, running parallel to it on the N. The other cleft occupies a very similar position on the N.E. side of the floor at the inner foot of the wall. On several occasions, when observing this formation and the vicinity, I have been struck by its peculiar colour under a low evening sun. At this time the whole region appears to be of a warm light brown or sepia tone.

A Single Twin An Older Tycho