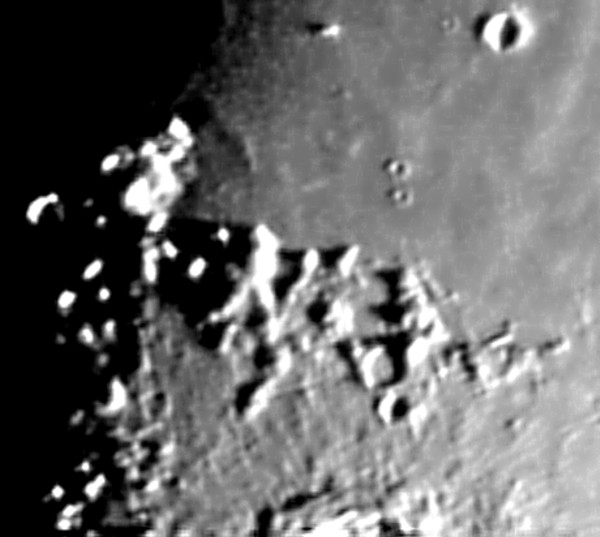 Comments on the above image:
This impressive mountain range north of crater Copernicus (officially known as Montes Carpatus) is a grand sight under low (local morning) light. Note the pronounced illuminated part which is unofficially known as Promontorium Banat ! (halfway between the frame's centre and its upper left corner).
Imaged through a 6" achromate with a 2X Barlow and LPI CCD camera. 50 stacked images. As a lunar observer since 1957, this range will always be the Carpathian Mountains to me.
- Gassendi- , and additional notes by - DannyCaes Sep 2, 2016
Additional note:
Do you also see this huge illuminated "N" in the photograph above? (an "N" shaped appearance in the Carpathian mountains).
- DannyCaes Sep 17, 2016

(IAU Directions) THE CARPATHIANS.--forming in part the southern border of the Mare Imbrium, extend for a length of more than 180 miles westward of W., long. 16 deg., and, embracing the ring-plain Gay-Lussac, terminate east of Mayer. They present a less definite front to the Mare than the Apennines, and are broken up and divided by irregular valleys and gaps; their loftiest peak, situated on a very projecting promontory north-east of Mayer, rising to a height of 7,000 feet. Notwithstanding their comparatively low altitude, the region they occupy forms a fine telescopic picture at lunar sunrise.